Do you agree in giving your children some chores? How can you make them do some chores without them complaining? Does it really help them to be responsible?

Children should do chores. That’s a controversial premise, though not everyone will admit it. A few parents will declare outright that their children are “too busy for chores” or that “their job is school.” Many more of us assign chores, or say we believe in them, but the chores just don’t get done.

That’s a problem. For starters, chores are good for kids. Being a part of the routine work of running a household helps children develop an awareness of the needs of others, while at the same time contributing to their emotional well-being. Children who consider themselves necessary to the family are less likely to feel adrift in a world where everyone wants to feel needed.

One small longitudinal study, done over a period of 25 years, found that the best predictor for young adults’ success in their mid-20s was whether they participated in household tasks at age 3 or 4. Those early shared responsibilities extended to a sense of responsibility in other areas of their lives.

I don’t want to make too much of a small study, and there’s really no need. All that the research in this area does is confirm what we already know.

Children who help more at home feel a larger sense of obligation and connectedness to their parents, and that connection helps them weather life’s stressful moments — in other words, it helps them be happier. Their help, even when it’s less than gracious, helps their parents be happier, too.

But for all that their help matters, to us and to them, few kids are doing much around the house at all. In a survey of 1,001 American adults, 75 percent said they believed regular chores made kids “more responsible” and 63 percent said chores teach kids “important life lessons.” Yet while 82 percent reported having had regular chores growing up, only 56 percent of those with children said they required them to do chores.

We believe in chores. We talk a good game. But when we look honestly at who’s doing what in our kitchens, laundry rooms and bathrooms, many of us (including me) struggle to do what it takes to get kids to help at home.

Between 2001 and 2005 a team of researchers from U.C.L.A.’s Center on the Everyday Lives of Families recorded 1,540 hours of footage of 32 middle-class, dual-earner families with at least two children going about their business in Los Angeles. They found that the parents did most of the housework and intervened quickly when the kids had trouble completing a task. Children in 22 families made it a practice to ignore or resist their parents’ requests for help. In eight families, the parents didn’t actually ask children to do much of anything. That leaves two families in which kids meaningfully helped out. (One of the young researchers involved called working on the study “the very purest form of birth control ever devised.”)

I asked 1,050 parents an open-ended question: What do you least like about parenting? The most common answer by far was “discipline,” which included enforcing chores and other responsibilities. Other answers: “Enforcing the rules, especially about household chores”; the challenges of “chores and disciplining a child”; and having to nag kids to do simple chores. We may think our children should do chores, but we really don’t want to have to make them.

And yet, when researchers ask parents about what qualities they care most about fostering in their children, almost all respond by saying they are deeply invested in raising caring, ethical children, and most say they see these moral qualities like these as more important than academic or career achievements.

But many kids seem to be getting a different message. Richard Weissbourd, a Harvard psychologist, and colleagues surveyedmore than 10,000 students from 33 middle and high schools around the country and found that almost 80 percent said they valued their own happiness and achievement over caring for others. Most thought their parents would agree.

“Our interviews and observations over the last several years also suggest that the power and frequency of parents’ messages about achievement and happiness often drown out their messages about concern for others,” Dr. Weissbourd said.

We can do better. Although household chores seem like a small thing, the subtle but pervasive message of requiring them isn’t small at all. Requiring a high schooler to contribute to the family well-being and the smooth running of the household before turning his attention to his books conveys the value you place on that contribution.

Sports and homework are not get-out-of-chores-free cards. The goal, after all, is not to raise children we can coddle into the Ivy League. The goal is to raise adults who can balance a caring role in their families and communities with whatever lifetime achievement goals they choose. Chores teach that balance. They’re not just chores — they’re life skills.

Persuaded? Then you’ll be looking, now, at the end of this article, for some golden advice on getting your children to step up. You might be worried that there aren’t enough words left here to encompass all you’re going to need to learn to make this happen. Is there another page perhaps? A link to click to make the magic happen?

There is not — because unfortunately, getting children to do chores is an incredibly simple two-step process: insist, and persist, until the chore is done.

Accept no excuses. Don’t worry if you must repeat yourself again and again. If you’re spending more time getting the child to do this job than it would take to do it yourself, then you’re doing it right. Getting children to do chores without nagging — that’s an entirely separate endeavor. Right now the goal is the chore.

Can an allowance help? Maybe. But if you’re trying to teach kids to share the responsibility of a home, paying them for routine chores is not the right message. After all, no one pays you to unload your own dishwasher, and no one ever will.

The good news is that children whose families have established an expectation that they will contribute to the workings of the household do just that. There are 7-year-olds in the suburbs who do the laundry, just as there are 5-year-olds in the Amazon who help harvest papayas. In our house, the kids clear their dishes, feed the animals, clean the kitchen after dinner and take out the trash. I’ve found they may not whistle while they work; they may require near-constant reminders; they will almost certainly not do the job to your standards without years of training, but children can and will do the work if you require it of them.

And in another 20 years, they might even thank you for it. 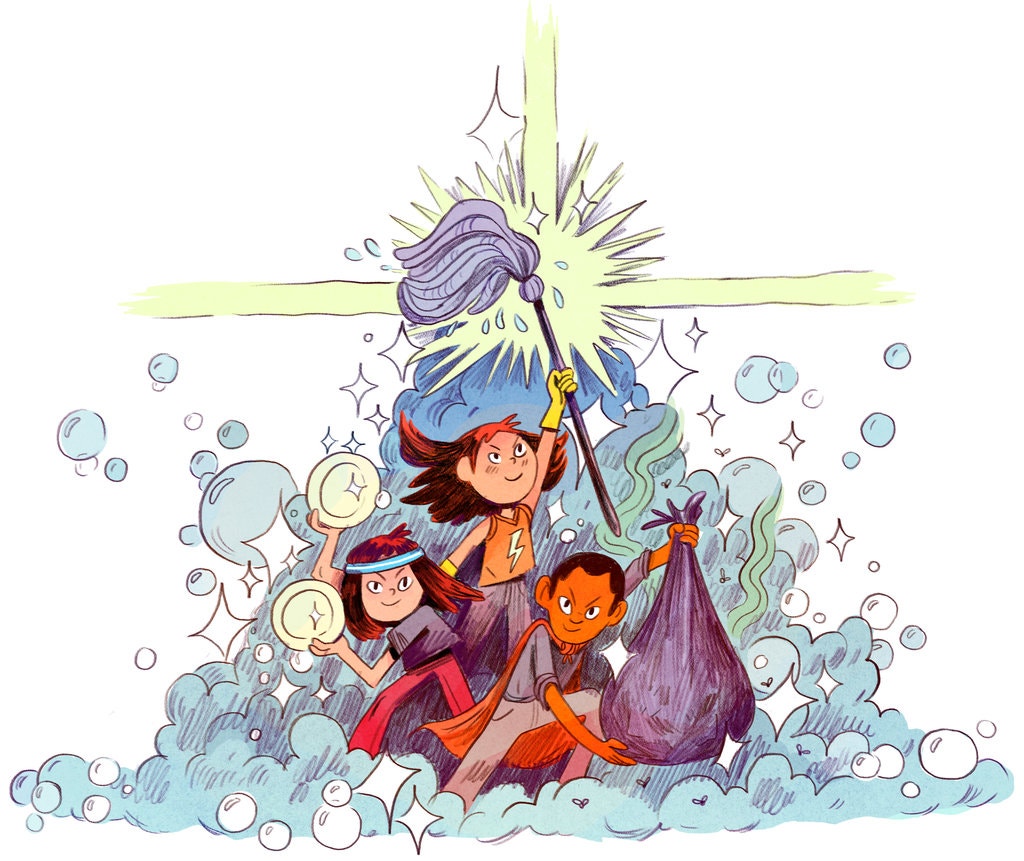 We are born creative geniuses and the education system dumbs us down, according to NASA scientists WP Symposium Pro - Extensions PluginThis demonstration…